Most people think that the internet and the World Wide Web are the same thing.
This idea is technically incorrect.
They are actually different but still connect by the way we use computers. 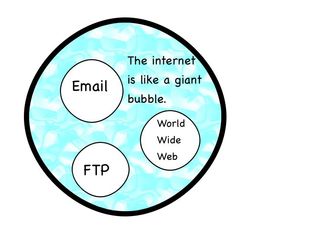 Think of the internet like a giant bubble. Inside the bubble are different parts:
- You have the World Wide Web
- Email
- and FTP (File Transfer Protocol), a method of sharing digital files

​
The internet is a term used when computers, tablets, phones or any digital device are all joined together in a network.
​
In 1962, a scientist from M.I.T. and ARPA named J.C.R. Licklider proposed a “galactic network” of computers that could talk to one another and the internet was born.

Today the internet has grown into a hugh 'spider web' where millions of computers, networks, tablet and all manner of digital devices are joined together.

​Take a look at the Internet of Things video below. If you cannot see it ask your teacher to play it for you.
What is the World Wide Web?
The World Wide Web (Web for short) is a massive collection of digital pages.
These pages are read and then put on your screens by the internet.

We see the Web through programmes called web browsers. You use Internet Explorer or Google Chrome at school.

The Web began in 1989, invented by Tim Berners-Lee, a British scientist because scientists around the world wanted to share information automatically.

Interesting facts
The number of unique websites as of 5th June 2017 4:45pm was 1,202,871,986. It increases so rapidly that without the date and time the number would be meaningless. Just in the time it took to write this paragraph it has increased by one thousand.

The Washington Post newspaper estimated, that there are 305,500,000,000 pages online. If you wanted to print those out, you'd need enough paper for roughly 305 billion pages.
​
How long would it take to download the entire Web? If you tried to download the Web from your computer, it would take approximately 11 trillion years.
How do we use them?