Logic Problems
Need a hint to attack logic problems, then scroll to the bottom of this page.

Mechanic under a coupe ( a two door car).
1. Parking Lot
Mr Smith, Mr Jones, Mr Brown, Mr Johnson and Mr Black work for  the Tinyburg Electric Company. Their cars are different colours: red, yellow, green, blue and white.As it happens, each man also drives a different type of car: a sedan, a station wagon, a sports car, a coupe and a convertible. Make the clue chart (illustrated) in Excel to record your deductions. From the clues given, try to determine the owner, colour and type of each car. 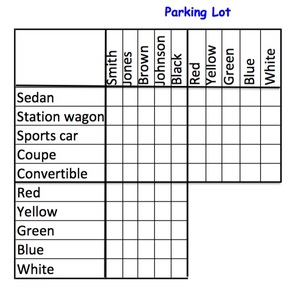 This grid was constructed in Excel. 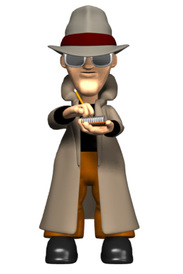 Writing clues
2. Who Dun It?
One rainy evening, five military men were murdered in the old mansion on Willow Lane (a general, a captain, a lieutenant, a sergeant and a corporal). The murders took place in the bedroom, basement, pantry, den and attic of the house. No two men were murdered in the same room or with the same weapon. The weapons used were poison, a poker, a gun, a knife and a shovel.

Make the clue chart (illustrated below below) in Excel to record your deductions.

From the clues given, try to determine the room in which each man was killed and the weapon used to do him in. 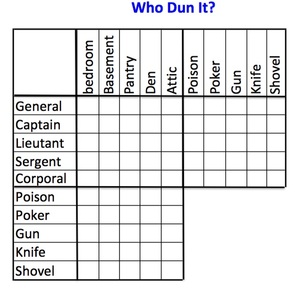 This grid was constructed in Excel.
Activity Time
Try conquering the three levels  in the math worksheet called ‘The Gold Mine’ by Simon Haughton. Each level (on separate sheets) has pairs of numbers to perform calculations on. The cells turn gold if the correct formulae are entered to reach the correct answer:
Writing Formulae
Writing simple formula follow these steps:

Download the worksheet and save it in your class folder.

Hint for Logic Problems
A chart will help you record what you learn from each clue and also record the facts that can be deduced by putting two or more clues together. Here is how to use the clue chart:
Suppose a clue told you: Two boys had different meats for dinner. John did not have ham.
You would put an "x" (meaning "no") on the chart, where John's row crosses the "ham" column, like this:

Now suppose the clue had told you: Two boys had different meats for dinner. Jim had ham.
You would put an "O" (meaning "yes") where Jim's row crosses the "ham" column. You could also deduce from this, that if Jim had the ham, John did not. So an "x" goes in John's ham box. Also if Jim had ham, you can deduce that he did not have beef - so still another "x" goes on the chart, where the "beef" column crosses Jim's row. The remaining space gets an "O". John must have had beef!

Of cause, this logic problem is so simple, it's hardly worth calling it a puzzle. But, it was useful to show how to use a clue chart for your challenge.